Change your world with magic mushrooms

Magic mushrooms look quite unremarkable at first sight. The Psilocybin Cubensis is a smallish brown and white mushroom. It is called the bald-head mushrooms in local parlance. But it is definitely not mild in use as in looks. Users are witness to the life changing properties of the magic mushrooms.The mushroom contains compounds called psilocybin and psilocin. They contain psychoactive compounds and can cause mild hallucinations, euphoria and other symptoms that are trippy in nature. Magic mushrooms have been used since centuries in Central American religious rituals and are now considered a controlled substance. 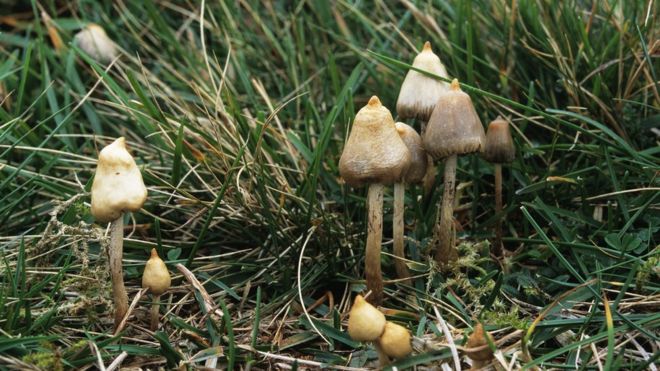 The compounds in magic mushrooms provide users with a “mind-melting” feeling. However the drug acts in just the opposite way. Psilocybin actually boosts the brain’s connectivity, found an October 2014 case study. Scientists at King’s College London set up 15 volunteers to undergo brain scanning through a magnetic resonance imaging machine. One group ingested a dose of magic mushrooms, while the other took a placebo. The brain connectivity maps showed that the brain synchronizes activity amongst areas that would normally not be connected. This altered activity can explain the dreamy state after experiencing the drug.

‘Shrooms act in other ways upon the brain synapses. Psilocybin binds with receptors involving the neurotransmitter Serotonin. Studies have found that magic mushrooms have other communication related effects along with increased synchronicity in the brain.

In another study, brain imaging of subjects who took   psilocybin reported decreased activity in the information-transfer areas of the brain like the thalamus, a gatekeeper that limits connections. This makes mood alteration more fluid.

Magic mushrooms may change people for ever

Psychologists say magic mushrooms may be able to change people for ever. If not forever magic mushrooms can have an intense effect on users for a long period of time. They are more open and receptive. They learn to appreciate art and creativity after using magic mushrooms. There is an enhanced emotional understanding and they value novelty more easily.

Trips have been described as extremely profound experiences. Users report feelings of joy and enhanced connectedness to self and to others. These transcendent experiences linger.  They even have a positive influence on battling fear and anxiety. It has had a calming and uplifting effect on the morbidly depressed patient.

Terminally ill patients have reported that their acceptance of the eventuality of death is more profound. They lose the fear of death as they perceive oneness with the universe. The spiritual insight that they gain takes away anxiety and fear. There is a major movement that demands the use of psychedelics as legal substances for controlled use. The controlled use of these exceptional substances may open a new vista for the mentally ill.

It is easy to order your stash of these life changing magic mushrooms from www.trufflemagic.com and experience the trip of your lifetime.